Stera establishes its position in India 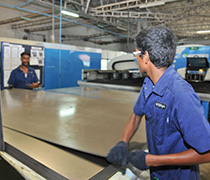 Stera Technologies Oy, a contract manufacturer of mechanics and electronics, began production in Chennai, India in 2010 and expanded into a new factory building there in 2011.

Finnfund granted it an investment loan for the expansion and has also financed investments in equipment for the new factory.

Among the most important development impacts from its growth have been new jobs. The number of Stera’s Indian employees has doubled in three years to about 130. The plant also provides work for a large number of people in services related to logistics, catering, material procurement, etc.

Stera has an exeptional programme in the manufacturing industry in India encouraging equality and employment of women. The gender roles in India are largely traditional, and only in the last few years, working life has opened up to women.

The number of its customers in India, all international companies, has grown steadily in the past few years. Future prospects are being enhanced by the rapid growth of the Indian economy, which is benefiting many Stera customers.

Operations in India have bolstered Stera Group performance in economically uncertain times. In 2014 group turnover reached 65 million euros, 10 percent more than the year before. In the same year the company took on 100 new employees, ten of them in India and 70 in Finland.