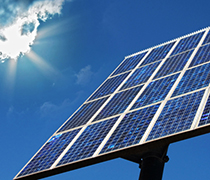 The seven plants have a combined capacity of 102 megawatts, and will be able to generate 212 gigawatt hours of electricity annually. They will be constructed and operated by various consortiums of Jordanian and international investors and technology suppliers.

This is the first major solar energy project in the entire Middle East and North Africa, as well as being the largest private-sector solar project in the region.

Jordan is ideally suited for generating electricity from solar plants. Relative to land area it receives about twice as much solar radiation as Finland.

At present almost all of its electricity is generated from imported fossil fuels. Non-polluting, renewable power produced from the seven new solar plants will cut carbon dioxide emissions by an estimated 123,000 tonnes a year, equivalent to the annual emissions of some 41,000 cars.

One of the advantages of solar power is that plant construction can be completed in months rather than years. Jordan has an urgent need for extra electricity because it has accepted hundreds of thousands of refugees from Iraq and Syria.

The Jordanian solar plants are Finnfund's first investment in a fast-growing sector that already employs hundreds of people in Finland. Finnfund intends to increase its solar involvement in future.

Finland's technology suppliers also have an interest in solar. Finnish exports of power electronics used in solar power generation are already worth tens of millions of euros annually, and are growing fast.