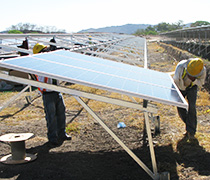 The project has a total rated output of 100 megawatts and consists of two similar solar parks. Among the institutions providing finance for one of them, Valle Solar, is Finnfund.

Sited in Nacaome on the Pacific coast, this is a solar project of Larach Group, a Honduran family-owned company specialising in renewable energy. In addition to Valle Solar, Finnfund has financed La Vegona, a Larach hydropower project in Honduras.

As well as relieving an acute shortage of electricity, Ville Solar will improve the country’s current account by reducing the need for oil imports. The solar park is expected to generate an average 120 gigawatt hours of electricity annually, equivalent to the consumption of about 152,000 Honduran households.

The solar park will provide jobs in a poor rural area. It will also produce about 72,000 tonnes less carbon dioxide annually, compared with generating the same amount of electricity from fossil fuels. The reduction is equivalent to the annual emissions of more than a quarter of a million cars.

A second major link with Finland is that the Finnish ABB company is responsible for the solar technology of both solar parks. The connection between the companies was made via Finnfund, and Larach selected ABB as the technology supplier in competitive tendering.

ABB’s contract, worth about 20 million US dollars, is an important reference and a breakthrough for Finnish solar power technology and know-how in the Central American market.