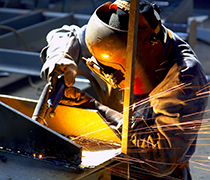 Machine workshop company Siimet chose a different route than its competitors and got itself a subcontractor in Vietnam, with Finnpartnership's support.

A few years ago, Siimet Oy, which manufactures oversize transport equipment, found itself facing a choice. The company would continue making its custom-made oversize truck trailers in Mikkeli, but the new serial production of trailers would have to be outsourced to retain the company's competitive strength.

Finpro's expert recommended Siimet to look for a partner in Vietnam instead of a country as vast as China. Siimet received Finnpartnership’s Business Partnership Support for identifying potential partners.

The pilot project with a new partner based in Ho Chi Minh City took three years. The Vietnamese company is responsible for manufacturing steel frames for trailers according to designs made in Finland. Final equipment are installed in Mikkeli.

The first steel frames for trailers have now been delivered to Finland and put on the road. The subcontractor’s price-quality ratio and delivery reliability have been very good. Siimet's target is a long-term partnership. Siimet also receives Finnpartnership’s support for training of the Vietnamese company's staff.

Carrying the heavy steel frames to Finland by sea is not free. In addition to fluctuations in sea freight prices, you have to be prepared for changes in exchange rates and wage levels. Competition is very tough in Siimet's field too. With more competitive products it will put up a good fight against its competitors.

The company’s most important clients are businesses that need heavy-duty equipment for transporting earth moving and forestry machines. In other industries, oversize transport equipment is needed to transport chemical pulp, paper reels and scrap metal. The Finnish Defence Forces, for example, use Siimet’s trailer chassis for transporting their equipment.

Founded in 1946, Siimet employs 25–30 metalworkers and a dozen clerical employees in Mikkeli. In the last few years, the company’s net turnover has amounted to approximately EUR 3.5 million.