Mobisol sells individual solar systems to rural African households beyond the grid, paid for in low monthly instalments using mobile money. A secured loan from Finnfund is supporting the company’s growth in Africa. The aim is to raise living standards and increase the use of renewable energy.

An old gutted Toyota Hiace van sits in the middle of a field in Kajiado County, a rural district of Kenya about 100 kilometres from the capital Nairobi. Last year the van was still providing a job for Mary Muigai’s husband Charles, and income for the family.

“We were living in a three-bedroom house that cost us 15,000 shillings (about 150 euros) a month. Then the car broke down and my husband’s work disappeared,” Mary Muigai explains.

When their money ran out, the family had to move to a wasteland where they live in a two-room house made of corrugated iron sheets. There was no electricity. Family evenings were lit by candles and kerosene lamps.

Now the family is getting by on the small wages that Charles receives from working as a mechanic.

“But I didn’t want the children to have to breathe kerosene fumes, which are bad for the lungs. That’s why I decided to get a system to produce electricity from solar panels and give us real light,” Mary says 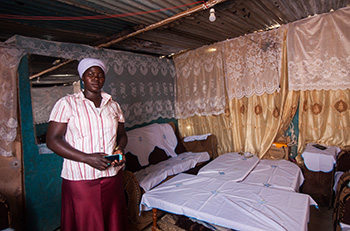 Mobisol, a company that has expanded to Kenya from Rwanda and Tanzania, supplied Mary’s family with a solar power system in December. The package consists of a panel for the roof and a battery to store electricity generated during the day.

“Now my 12-year-old son Ian and my 14-year-old daughter Jane can do their homework late into the evening and I have light to work by when I get up early in the morning to prepare food. I’m really happy we bought the system.”

Where the sun shines

Mobisol’s business concept is to sell solar power systems to individual African households. The main target group are people whose homes are not connected to the electrical power grid.

The customer buys the equipment in equal monthly instalments spread over three years, paying with M-Pesa, a mobile money transfer service. After that, the electricity costs nothing.

Founded in Berlin, Mobisol already has a firm foothold in Tanzania and Rwanda - where the company has installed nearly 80,000 solar home and business systems so far. In March 2016 it began operations in Kenya, with a local office in Nairobi. Equipment sales began in September 2016 and within 6 months about 450 solar power systems had been sold. 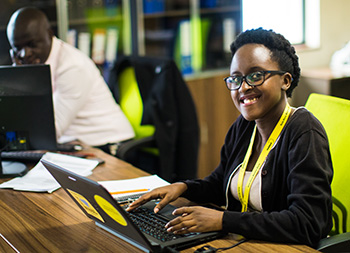 Each package comes with a SIM card and an antenna. From a computer in Nairobi, IT Manager Ruth Gicharu has a real-time view of customer payments as well as equipment malfunctions. During the three-year payment period, the customer receives free support and maintenance.

“Most of our customers in Kenya are in the west, in Kisumu and Kakamega counties, where grid coverage is patchy. We also have customers in Nairobi but usually they are buying equipment for relatives in the countryside,” Gicharu says.

One such customer is Samuel Kiarie Kangetne, 21. His mother lives in Kajiado County, a lower middle-class area outside Nairobi.

“There is grid coverage where she lives but the connection charge is expensive and frequent power cuts mean it’s not reliable,” Kangetne says.

In December he bought his mother a Mobisol package that includes a television in the monthly fee. After an initial charge of 6,000 shillings (60 euros) he is now paying 3,000 shillings a month. It’s affordable, he says. 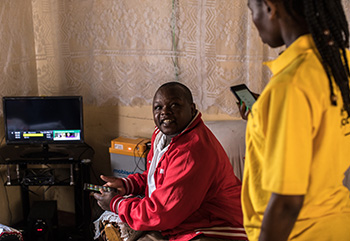 “The main thing is that my mother is now self-sufficient in electricity. We also know how much electricity will cost in the future whereas the power company’s tariffs have been rising. So it’s more predictable.”

The best thing, he says, is that mother does not have to worry about power cuts any more. “Now she can watch her favourite channel, Citizen TV, whenever she wants.”

Mary Muigai is happy with her Mobisol package but life could be even better with a television.

“The kids would enjoy watching movies and cartoons.”

She has a basic Mobisol package that does not include television. To run a TV she would have to upgrade the equipment and the monthly payment would rise a bit, to 3,000 shillings a month.

Mobisol’s Head of Marketing, Cedric Todwell, advises her to wait a bit longer.

“Let’s see how the payments work out over a longer period. We don’t want to sell people the most expensive package but the one that they can truly afford. It would be a great disappointment if they couldn’t keep up the payments and we had to repossess the equipment.”

In 2016 Finnfund granted Mobisol a loan of EUR 7.5 million to finance growth. An important reason was that supplying electricity to new areas can improve human lives, reduce inequality, and even help people out of poverty. At the same time it gives them access to news and information, by allowing them to run a television and charge a mobile phone.

“About a third of our customers use the service to develop small businesses. For example, the owner of a small bar can attract customers and make more money if he shows television programmes,” Etienne Stüttem points out.

It was significant for Finnfund that electricity produced from solar power helps to curb climate change. There is also an important health perspective; providing clean energy in place of the dirty kerosene burners that are widely used in African countries.

While raising living standards, Mobisol’s business is also profitable. Selling equipment by instalments is not a gold mine but the market has long-term potential. As the African population continues to grow, so will the number of customers.

During its first full year of operations in Kenya, 2017, the company is aiming at 10,000 customers. It wants to continue growing and cover the whole country.

“After another 18 months we will be standing on our own with sales in Kenya,” says Martin Kingori, Director of Finance at the Kenyan office.