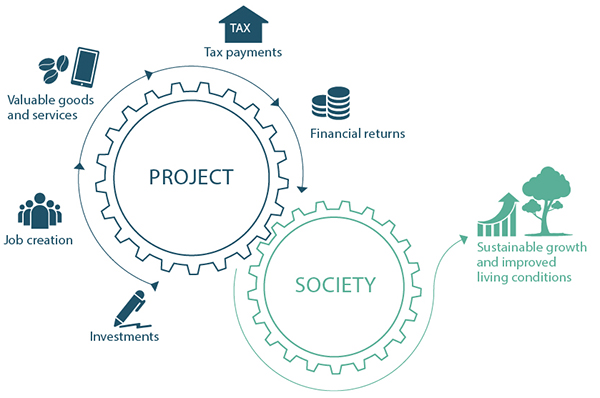 Finnfund’s mission is to promote economic and social development in developing countries. Finnfund aims to create significant direct environmental and social impacts in the companies it finances and among their immediate stakeholders. In addition, the funding provides opportunities for indirect positive development that benefit society at large in the target countries.

In compliance with the agreed practice of the development financing institutions, Finnfund monitors the number of jobs – the number of female employees in particular – and the tax income and other tax-like payments of the companies it invests in. Furthermore, Finnfund monitors the energy produced, domestic purchases made by the projects, microloans, and loans offered to small and medium-sized (SME’s) enterprises.

The development impacts of 2016 will be collected in spring 2017, hence the reported development effects of 2015 in this report are used.

One of the most important development aims and achievements of Finnfund is the tax revenue and other official payments the companies financed pay to their host countries. With these funds, public administration in each host country can develop their infrastructure and offer services to their citizens, such as education and healthcare.

Many companies that Finnfund finances are significant taxpayers, directly or indirectly, in their target countries. According to the data reported in 2015, Finnfund financed companies paid a total of EUR 285 million as taxes and tax-like charges in their respective countries. Out of this, EUR 36 million was paid by directly funded companies, EUR 182 million by companies in which Finnfund had invested via funds; and EUR 67 million by financial institutions. Corporation tax amounted to EUR 127 million or 45 per cent of the taxes paid.

Most of the taxes and tax-like charges were paid to countries in Africa (EUR 113 million), followed by countries in Latin America (EUR 88 million) and Asia (EUR 65 million).

In many cases, a job is the most important issue when someone is trying to escape poverty. According to an estimate by the World Bank, 90 per cent of new jobs in developing countries are in the private sector. That is why a job is so important for the development of an individual, their immediate circle and society at large.

According to the reported data, at the end of 2015 the companies in which Finnfund has invested employed 25,600 people; 9,140 (36%) of which were women. More than 12,000 or almost half of the jobs were in Africa. Of the direct investments, the investments in the forestry sector offered the most jobs. The funding sector and companies that offer small-scale funding also employ a large number of women.

The significance of indirect jobs from the development perspective is high: one company can boost local business activity and create a large number of jobs in its immediate vicinity. The companies financed by Finnfund reported that they supported more than 100,000 indirect jobs, of which around 70 per cent were in companies supported through funds.

Finnfund promotes the creation of decent jobs and businesses. Finnfund actively monitors the project companies’ HR practices and is committed to the UN Guiding Principles on Business and Human Rights and the fundamental principles of the International Labour Organization (ILO). Finnfund requires from its customers compliance with these principles throughout the project period. They are included in the funding agreements, and compliance with them is actively monitored.

Many of the development impacts are project-specific and the impacts of all the projects in a portfolio are not the same. On the development impacts that only influence some of the project portfolio, one could mention that in 2015 Finnfund’s customers produced more than 3,000 gigawatt-hours of electricity, cooperated with 16,000 farmers and granted around 3.3 million microloans that amounted to a total of EUR 764 million.